I didn’t mean to tell Mama my work day plans included pulling blackberry vines out of the meticulously cared for wild honeysuckle she trained to grow over the section of old fence that was left standing for it, the new fence now nearly a quarter of a century old. But when she asked what work I was going to do, it caught me unprepared with a therapeutic lie.

She has a thing for the native trailing blackberries. That those vines haven’t produced berries in the five summers I’ve been here, and probably long before that—which is not to say the vines have stopped growing—isn’t something she retains in her head. That there were berries years ago is all that remains. She hears “pull” and “blackberry vines” in the same sentence and she goes into control mode. “That’s the best spot for blackberries!” she exclaims when I blurt it out as one of my plans for the day’s spring cleaning.

I could have mentioned any number of tasks, even those I’d already done: plant beets and potatoes, treat the lawn with Moss Out, fix the latch on the garden gate, pick up winter blow down, clean out trails, cut last year’s black-eyed Susan and chrysanthemum stalks, pull weeds, trap moles, edge the garden walk. But no, I went straight for the blackberry vines. In retrospect, remembering how the blood rose to my head—unreasonably feeling challenged when she was just being interested—I wonder if I grabbed the one that would establish the control and decision making as mine. The one that would put me squarely in contention with her, like I’m 15 instead of 65.

I tell her there are no berries there anymore, and that the slender, prickly vines will overtake the honeysuckle if left to their own devices. And the rhododendron and sword fern at the edge of the driveway. The driveway itself as the vines snake across each spring if left unchallenged.

She moves on to the neighbor telling her there are more trillium than “ever before” this year. I move on to the trillium being buried under blow down, Oregon grape, and dead sword fern fronds. And blackberry vines. I tell her I will free it. That mollifies her.

That was Monday. But last Friday, now that was a day. I wasn’t in a foul mood when I got to the Manor, but I sure was when I left. One of those “demanding—crazy talk—don’t want to listen to your ideas because you aren’t blind so you can’t know what I need—I asked you do something and you said you don’t have time—don’t tell me I didn’t ask you,” visits.

I was so irritated I blew off the one beautiful, not raining day of the week. Though pulling blackberry vines might have been just the antidote, I couldn’t deal with the overwhelming amount of work there is to do outside, so I didn’t even want to be outside. Instead I ripped the threadbare, dirty carpet and its 30 tack strips off the stairs, returning them to their original nakedness.

As I revealed the original hardwoods and noted the worn edges of the treads, I flashed on Rebecca and me glissading—bumping really—down them on our bottoms. They need to be professional refinished, but it makes me happy to have them back to the way they were when I lived here before.

It rained all weekend, spring monsoons. It drummed on the roof and spat against the windows. I felt rueful of not taking advantage of Friday’s sun. But when Monday’s forecast changed from rain to sun at the last minute, to be followed by another ten days of rain, I was conflicted. The yard work? Adventure? I decided on both. You can read about the afternoon adventure here.

I make an earlier than usual visit to the Manor, where the blackberry battle happens, then go home and pull vines, Oregon grape, and weeds along one side of the driveway. I increase the size of my blow down pile by 75 percent. I shovel up years worth of decomposed fir needles covering a foot or two of the edge of the driveway pavement that the forest is expanding into. I haul several wheelbarrow loads of the rich loam to the parched soil slope below the house.

I remember Mama’s oft-stated warning in years past when I went out to work that she “never wanted the property to look like a park.” No chance of that, I would say. Neither should it look like reclaimed wilderness, I would think, visualizing kudzu covered houses in the Southeast. 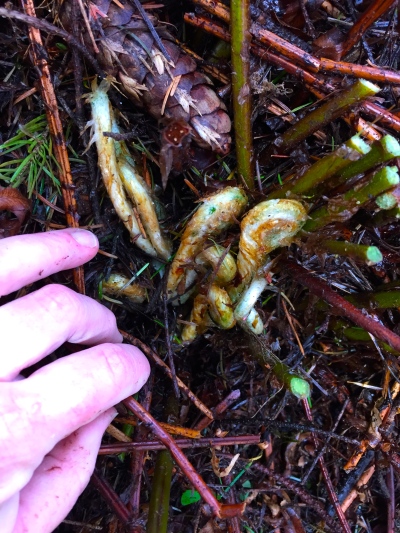 Death is another thing that can’t be beat. Mama has a swollen ankle. I won’t go into that here just now, but she asked the hospice nurse what she could stop doing to fix it.

A friend who cares for her own mother said, “It must be such a burden to live with the belief that you are 100% responsible for your health and whether you live or die.”

Days after my 60th birthday, I moved across the country to my childhood home to live and learn for a while with my 96 year old mother. What is fit to print is shared here. For my other writing and photography, visit me at writingdownthestory.com.