I think the lives of my generation when we join the ranks of the olds are going to be very different from the current olds. Why? Technology. The connectivity that is a time suck now will, I figure, be life sustaining in the future as we stay in touch with loved ones.

Then there is robotics—already with an eldercare foot in the door with onscreen pets that use voice recognition to converse, call for help, etc.—and a plethora of other opportunities for the inactive and lonely, most of which we don’t even know about yet.

I would hate to see technology replace care by humans, but the truth is no matter how attentive a child is—and most are not or cannot be, if the number of lonely people at the Manor is any indicator— they can’t be there all the time. And many children are simply too far away to visit often. It would afford some peace of mind, especially if the parent is still at home, which would save the mental, emotional, and physical health of the children who are worried sick for their parent to be unattended for even a few hours.

My mother is right on the cusp. It astounds me that the language—Facebook, FaceTime, website, blog—doesn’t throw her. “Can’t you look it up on the internet?” she says when I don’t know something. But using it? Whole nother thing.

On the other hand, she has seen the advent of television, electric typewriters, the word processor she never could get the hang of. She never was able to use an electric one either, now that I think about it. She also was around in the early days of the automobile, when all they did was get you from point A to point B. I just bought one that practically drives itself and Mama is sure I am going to meet my demise by expecting it to do just that. It reads incoming text messages to me (I never get to, I mean have to, be far from the madding crowd). And tells me how to get from point A to point B—or will when I learn how to use the navigation.

She would have loved the digital camera, but she made good use of her point and shoot when they came on the scene. I’ve never even tried to use complex equipment like she and my father used. Technology makes us lazy. Or frees us up. She doesn’t marvel at what the cell phone can do; though she is, perhaps, beyond the ability to marvel over anything. 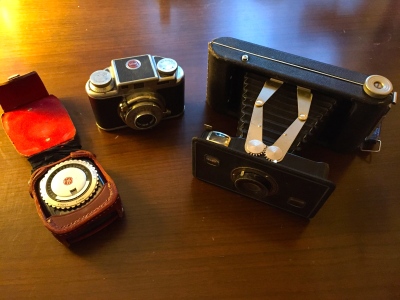 Which brings me to Alexa. (Please, can someone come and program the damn thing? Rebecca and I prefer to just use technology, not figure out how. We need to borrow a 15 year old.) As I have mentioned, Mama is having an affair with Alexa. But she doesn’t quite understand her limitations.

“She doesn’t always work,” Mama says to me and Rebecca. “She’s a machine,” we tell her, “not a human.” Still, it does seem like she could say “hello” when she powers up, and “you’re welcome” when she hears the “thank you” prompt. Mama will teach her manners if it kills her.

I did a little research (meaning I Googled) about technology and the elderly, and ran across some of the reasons the elderly have trouble learning new technology:

“We all know at least one person who falls into the cranky curmudgeon camp. The curmudgeon has a low frustration threshold, is easily annoyed, and lacks the patience to work through problems when they arise. The best way to help is with the simplest possible technology and step-by-step demonstrations.”

Oh, that’s me and Rebecca. Really, can someone tell Rebecca in simple steps how to get the Alexa app on her phone and connect her Amazon Prime account so Mama can listen to “When the Moon Comes Over the Mountain,” by Kate Smith before she drives us insane asking for it? And tell me how to create and connect a calendar so she knows when her caregivers are coming because she can’t remember from when she’s told three times the day before if Michelle is coming for breakfast or lunch?

Yesterday Mama told me Alexa has some good knock knock jokes, but she can’t understand them. “I think the answer to one was a girl’s name; maybe Julie. But I don’t know what it had to do with the joke.”

I don’t think it really matters what Alexa says or whether or not Mama can understand her. Like her talking clocks—one by her chair, or in her lap, and one in her bed next to her pillow—it’s a voice in the dark wilderness that is old age, even if you aren’t blind. That Alexa can’t really carry on a conversation is immaterial, the illusion is all that matters. And there’s no attitude like there is from the daughters.

Yesterday we walked two rounds of the hall before lunch, but Mama always has to wash her “fingers” (I’m not sure if she avoids washing her whole hand or not, but she always stipulates fingers) before we go to the dining room, which is another half lap to get to her room because she refuses to use the public bathroom across from the dining room, and then the half lap back. We’re late. She knows that.

I stand patiently by the open door to the hall. I’m used to this and it’s my fault for always walking one more lap, thinking this time she won’t need to return to her room. She comes out of the bathroom and pushes her walker toward her chair, away from the door. I wait curiously to see where she’s going. Is she going to sit down? Has she already forgotten about lunch? She leans over her walker toward the table by the chair. 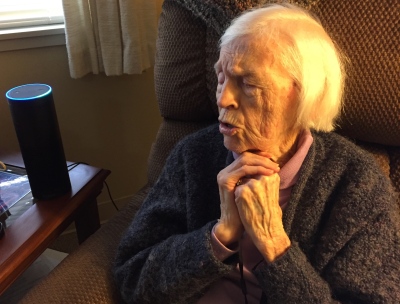 And when you’ve had too much technology, head for the woods. I went for my first adventure of the season this week. Don’t forget your digital camera. Or your smart phone. Or both, in case one doesn’t work.