I was a candy striper back in the day, a trembling middle-schooler under the watchful eye of Sister Perpetua—learning to make the hospital corners my mother bitterly complains of should anyone make her bed that way. One of my summer jobs in college was as an aide at Centralia Convalescent Center. They were my first experiences of the old-old.

Now I have a different view of life in an assisted living facility. I have to say, the residents at the one my mother is in are nothing like my memory of them when I was much younger. Or maybe I just see them differently, now that I am closer to their age.

Last week Marjorie had a crisis. She’s an Alzheimer’s victim (and I use that term with intention). Turns out her husband—also a resident, though I suspect only because she is—was in the hospital for a procedure and Marjorie lost  what holds her center. I didn’t really believe my mother when she told me one of the residents was in her room while she was napping. I quietly asked an aide who confirmed the story. In fact, Marjorie had been in several rooms that day.

While my mother ate her lunch I went back to her room to get her homemade applesauce and noticed her door ajar. I knew I had closed it, and had a premonition. I peeked around the corner to my mother’s bed. Marjorie was in it sound asleep. I thanked the gods I had gone back by myself. I summoned help from two aides who got her out of the room. “Don’t tell my mother,” I said.

I told my mother the story of why Marjorie was wandering, appealing to her compassion in case it happened again. “I told her ‘get out!'” Mama said, “but she didn’t seem to understand me.” “Those words may have frightened her,” I said. “And I know you were frightened too. Hopefully it won’t happen again, but try telling her she is in the wrong room; I think she understands that. Then push your call button. I know it’s disconcerting,” I added, “but she is harmless, just confused and alone.”

Mama is sure she has the flu, of the stomach variety, because there were a few cases at the Manor, and her private aide, Michelle, has been under the weather and staying away. The first time she told me that I ignored her. The next day when she said it again, I said,  “You don’t have the flu!

“Then what do I have, Dr. Gretchen?” she said, her voice dripping sarcasm.

“You have a bowel that refuses to work like it used to,” I said.

“Well it’s too much of a good thing,” she said.

The next day she told me for the third time. Knowing the hospice nurse had been there, I asked if Laurel said she had the flu. “I don’t remember what she said,” was her response. Really, I had had it.

“Are you throwing up?” I asked.

She touched her throat and said, “Sometimes I feel like I want to.”

“I can’t take my temperature! And I don’t think Laurel took it.”

I had warned Laurel that Mama thought she had the flu. Laurel said she wouldn’t survive the flu, so it was highly unlikely. (I think my mother would survive the apocalypse.) Rebecca and I hypothesize that just like her decades of doctors’ appointments trying to fix the unfixable, she believes that if only she has the flu, when it’s over she will feel better.

She wants me to bring her wool turtlenecks from home. I’ve learned better than to ask why she makes these absurd requests. It’s hot in her room, she could not possibly need warmer clothes. I was silent, but she told me anyway.

“Spring is coming and I’m wearing summer tops. If I don’t wear the winter ones now I won’t be able to.”

I rolled my eyes and told her I would bring them. Her voice followed me out the door as I was leaving—which I’d been trying to do for ten minutes—telling me all the places to look for them, like I didn’t know. When I got home and found none of those she described in excruciating if not correct detail, I remembered at least one of them is in her drawer at the Manor. I suspect she got rid of the rest because they were uncomfortable, but now she only remembers when she wore them. Dementia is hell.

Life goes on, fearing the next crisis, fearing also there will be no crisis and this non-life living will just go on and on.

“I don’t want you and Rebecca to feel like you have to be here,” she says, “you need to get on with your lives.”

She doesn’t know how to let go. She will not let go.

Laurel told me the hospice doctor who believes anyone over 90 should be eligible for hospice, and perhaps bends the rules a wee bit, is leaving. “You can’t leave before Stellajoe dies!” Laurel told her. “I’ll be ready to retire by then!” the doctor said. Today she will be evaluated for re-certification. My stomach is in a knot. 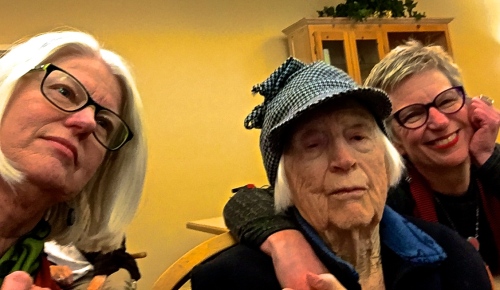 I am a Pacific Northwest native transplanted to the southeast for 36 years. In 2012, I returned to my childhood home and fell in love with this corner of the country again. I am a grandmother, a storywriter, a teacher, an attention payer, a hiker, and a back roads wanderer. Check out my website (and my memoir) at www.gretchenstaebler.com. View all posts by Gretchen Staebler

6 thoughts on “Tales from the Manor”