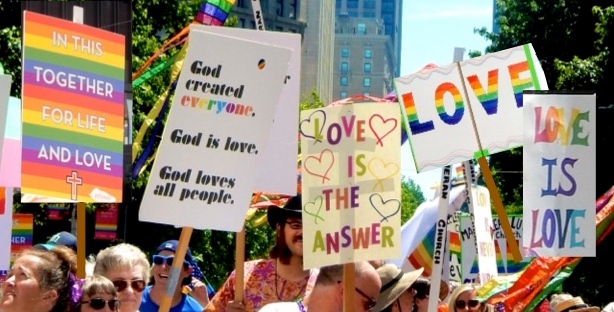 The sun beat down, the pavement burned, drag queen make-up threatened to melt in the 95º heat. There was a 30-minute delay as news trickled back through the blocks-long staging area that protesters had blocked the route as the Seattle Pride Parade began moving. Not the usual and expected protesters—the “christian” wrong who had carried their dark, judgmental signs through the gathering crowd before taking up real estate at the end of the route, shouting over the blaring music that God’s wrath would be upon us all (well, except for them, I suppose). Rather it was a small group protesting the police action that left a Seattle woman with mental illness dead after she called 911 earlier in the week. They were not outwardly demonstrating against the police, but rather requesting a period of silence in remembrance of the victim. 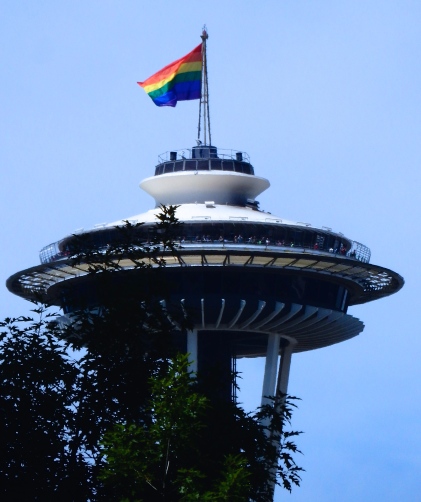 In spite of it all, the 200,000-strong crowd and the participants—so far as I could tell—were jubilant, celebratory, calm. They distributed water, sang and danced, hugged, and flashed hand signals of loving kindness as they raised their colorful banners and hand-lettered signs toward Seattle’s blue skies imploring acceptance, equality, and love for all.

I marched with my employer, a Lutheran organization that assists Seattle area Lutheran churches seeking to be inclusive of persons who identify as LGBTQ and ministering to individuals who have been disenfranchised in the past by unaccepting churches. I was proud to walk with more than 160 love-filled Christians representing 27 Lutheran congregations and organizations. Love conquers hate. All God’s children got a place in the choir of love.

The littles were there too, in their rainbow robot shirts, proudly walking with their two moms in the Seattle Public Schools contingent.

The event was more political than usual; it had to be, as politics-not-as-usual loudly and angrily threatens to rip apart the fabric that binds this country together. Petitions circulated: asking for a bill to require police cadets to receive training in approaching the mentally ill, asking that voters refuse to sign the petition to put the “bathroom bill” on the ballot (the one that did not get on the last ballot). The ACLU walked ahead of my group, urging resistance. This country was founded on resistance, and the search for religious freedom and freedom from religious persecution. We seemed to be making progress, and now we see what a slippery slope we are on.

Those who would silence the voices that don’t sing the way they do are so sure God doesn’t love a segment of God’s family. The altos? The tenors? One sign, “Trust Jesus Christ,” particularly puzzled me. Who were they talking to? Not the group I walked with, not the other denominations represented throughout the parade. Jesus was nothing if not a demonstrator of love for all. Who, exactly, isn’t trusting that it will be—that it is—okay? No one is being asked to leave the choir, just to come together and expand the choir loft. There is room for all of us. Jesus said, “You will always have the poor with you” (Matthew 25). I wonder if he wasn’t only talking about those with empty pockets, but also those with empty hearts. We greet them with love.

The day after the parade, my grandson put on his dancing skirt and got cool in the sprinkler. I thank God every day for his wonderful moms who are raising him in love. And I worry for the day he discovers that some will refuse to accept his family and he will learn there are people set on shutting him out because of the parents he loves. All we can do is ground him and his brother in a circle of love and trust the One Who is More that it will be okay.

All God’s creatures got a place in the choir
Some sing low and some sing higher,
Some sing out loud on a telephone wire,
Some just clap their hands, or paws, or anything they’ve got now.

I am a Pacific Northwest native transplanted to the southeast for 36 years. In 2012, I returned to my childhood home and fell in love with this corner of the country again. I am a grandmother, a storywriter, a teacher, an attention payer, a hiker, and a back roads wanderer. Check out my website (and my memoir) at www.gretchenstaebler.com. View all posts by Gretchen Staebler

9 thoughts on “A Place in the Choir”