I’ve been dreading the arrival of spring. I know, you are saying, “You have finally lost it, Gretchen.” And what with the rain and the late snows and the slow-to-bloom spring flowers, it would appear the Universe is honoring my wish to put off the march toward summer extroversion a bit longer. 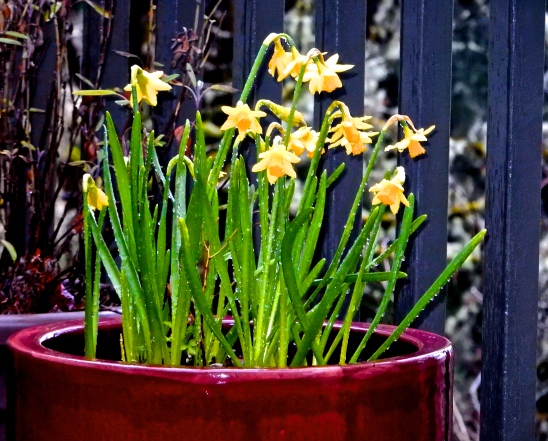 I can explain. There is an enormous amount of work to do outside. When it stops being winter—if it stops—I have to abandon, or preferably be finished with, my indoor projects. That includes getting space ready for an AirBnB. Repurposing the space I’ve been living in means making room for me upstairs. One of those projects included “reorganizing” my father’s study, and since then I’ve been loving writing in this room where I feel his presence. I want to stay holed up in here. 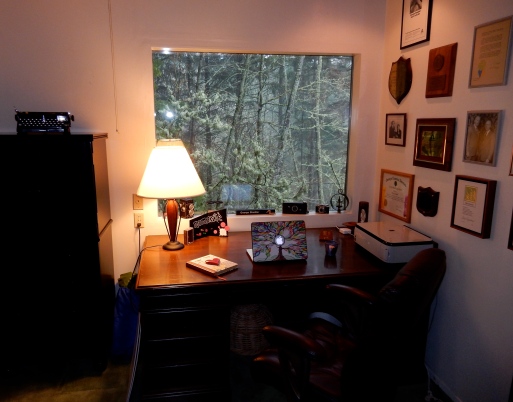 I’ve been dreading going outside because I’m now in charge of my mother’s garden. I don’t like working in other people’s gardens; I’m more a creative—or recreative—type. I have enjoyed recreating some long-abandoned nooks and crannies and making them my own, but I haven’t touched the major gardens. I left them to Dan the Handy Man, who was less averse to following instructions, and who is no longer doing it.

Then one afternoon last week—five days ago—the sun came out. It was even warm. Damn. My mother had commanded that morning that I not do any outside work because I have had a cold for weeks. I was inclined to be the obedient child, though her concern was, in my opinion, ridiculous. I was enjoying just writing and reading and not doing anything at all I needed to be doing, inside or out, in the name of “sick.” I checked the forecast the day the sun deigned to show its light: none in sight again in the 10-day. Sighing, I put on my boots, grabbed my gloves and clippers, headed out.

I cut off last year’s sword fern fronds, and the chrysanthemum and black-eyed Susan stems, and a bunch of other dead detritus from last season’s garden. A whirlwind 45 minutes. I left the piles at the edges to be picked up another day. It’s been raining ever since.

I enjoyed it! It felt good to take the old in my hands, thank it for the beauty it provided last year, and create space for what’s to come. It was an honoring of the past, without getting stuck in it. It’s what I’m doing inside too: putting away what doesn’t give me joy and uncovering buried treasure to bring into the light.

I remember how much I enjoyed restoring Mary Mingus’s garden at my little house in Raleigh. Like the objects of a life I am uncovering inside this house and making space for, back then, as I pulled out the life-snuffing English ivy, I found bulbs that had no room to rise from the earth and buried flagstone from an old walkway to lay a new one. I discovered writing in that garden and poured out my observations about life and gardening in my first blog, My View from the Garden.

I suspect every gardener my mother hired was bound by her instructions and lists. She loves her lists. I inherited that love; but my lists are for me, hers were for her hires, at least in recent years. What I don’t like is being told how to do things. She revels in telling people what to do and how to do it; I’m a rebel. It has been the spine of our discontent all the years, past and recent, I have lived with her.

Now she isn’t onsite to instruct, and I can’t wait to get back to it. I feel free to honor her love of nature through her gardens, without obligation to follow her rule book. I will make mistakes, pull things that should have been clipped, prune in the wrong places, thin too much or too little, plant new things where there’s too much sun or shade. But that’s okay; we will all survive.

Meanwhile, along with my mother’s garden to finish uncovering, there is winter blow down to pick up, two garden gates to repair, the vegetable beds to prepare and start planting, trails to clear…and the AirBnB to get online. There’s sun in the forecast for Sunday. I’m ready.

By the way, Mama was discharged from Hospice, again, last week. Failure to decline.

16 thoughts on “In Search of My Mother’s Garden”