Friday is coming. I am afraid. I am sick at heart. I am incredulous that this can be happening. I am saddened by the comments supporters of the president-elect leave on Facebook posts written by people in honest concern and peaceful protest. Not because people have different opinions—that, along with protest, is what this country is about—but because of the vitriol that is projected in their words.

Supporters of the new administration say (on Facebook, which I think helped elect this man) that those of us who are afraid for the world because of this election are just whiners. “Your candidate lost, get over it,” is one of the nicer things I have seen. I have been disappointed in past elections, and I confess to having done my share of whining. This is different. Never before has the personality of a president-elect shown up in the Diagnostic and Statistical Manual of Mental Disorders (DSM), at least not in this country. (Disclaimer: That is not a researched fact.)

I am afraid. And fear makes me heavy. I don’t know what I can do. I am tempted to “duck and cover” for the next four years. I believe some bit of that is helpful protection: I am less afraid of what I don’t see, and it isn’t healthy to live in fear. I am not going to watch the inauguration, because I don’t want to add my voice to the ratings, but mostly for the same reason I don’t watch horror movies: I don’t want fear to take up residence inside me. I will be in my yoga class on Friday morning, breathing with extra mindfulness.

But I don’t think duck and cover is the answer for the next four years. So what can I do? I am going to the Women’s March in Olympia on Saturday, not because I think it will change anything, but because I believe hope is part of the solution, and what we can and must do to stay hopeful is stay in community, not cower alone under the desk.

I am going to try to stay hopeful that when my grandsons grow up, this time will be but a footnote in history, or—even better—it will be a demonstration of the power of the people. That Elliot and Adrian’s moms will not have lost their right to be married. That immigrants like Elliot’s Chinese caregivers will continue to be able to share their gifts in this country. That their Gigi will not lose her ACA health insurance and that her Medicare coverage will have kicked in on schedule and stayed strong. That  climate change won’t go unchecked and their children will still be able to live on the planet.

I am hopeful that truth telling will make a comeback. The Oxford English Dictionaries picked “post-truth” as the 2016 “word of the year.” They defined it as: “relating to or denoting circumstances in which objective facts are less influential in shaping public opinion than appeal to emotion and personal belief.” I guess that is the premise advertising is based on, and stories in the National Enquirer. It seems inappropriate for electing a president, but there it is.

An editorial in The Christian Century says we have moved into “a world in which widely available facts seem unable to dent the appearance of attractive falsehoods.” It goes on: “Truth telling involves having the humility to be corrected…There has to be a shared reality beyond self-interest for the concept of telling the truth to gain traction; otherwise speech is mere self-assertion.” I wonder if “fact-check” will be next year’s word of the year, if “fact checker” will become the fastest growing occupation in the job market.

Jesus promised, “You will know the truth, and the truth will set you free” (John 8:32). Rev.Jim Harnish, a retired Methodist minister, writes in a blog post: “One of the most patriotic things people of faith can do will be to sort out objective facts from politically advantageous fiction and to attempt to hold our post-truth President accountable to it.” I think we can all do that, whether we are a person of faith or not.

A couple of weeks ago my mother asked me when the inauguration is. I told her I didn’t know, I didn’t care, I wasn’t going to watch it. She was appalled. “You have to know what’s going on,” she said. She’s right, we all have to stay vigilant; duck and cover is not a good strategy. I’m still learning from her. I started listening to NPR again—although now that I’m not in the kitchen for an hour and a half everyday preparing her dinner, I don’t hear much of it. But I’m still not going to watch the inauguration. It will do nothing to keep me hopeful or to keep fear from taking up space in my soul.

I will stay in community. I will keep watch. I will refuse to get information on anything other than my friends’ lives from Facebook and continue not to add to the false news there, however clever the meme. I will speak gratitude for all who are doing what they can do. I will pray that members of Congress be given wisdom and courage to do the right thing even when the current is flowing against them. I will refuse to cower in fear. I will remain hopeful and keep my heart open. 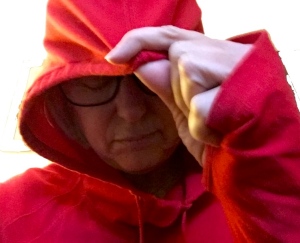 For a post about my mother this week, in case you missed it, here is Monday’s post again.

6 thoughts on “On Fear, Hope, Truth, and Vigilance”