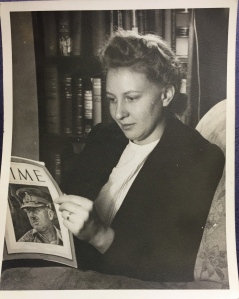 I traveled to Tucson last week for my aunt’s memorial service. Ruth was my father George’s little sister, younger by fourteen months. They were close; and she was like a sister to my mother as they waited together at the family farm in Michigan for their husbands to return from the war.

Aunt Ruth was the less, shall I say docile, of the two sisters in the family—more likely than big sister Helen to give their four brothers grief and to speak her mind. I always kind of loved her for that. I have often heard stories of her belief that she was least “special” in the big family: not oldest, not youngest, and overshadowed by the “almighty George.” I hope I told her how special I thought she was.

Iconic photo of Ruth and George.

I took a walk in the Saguaro National Park while I was there—checked another NP off my “visited” list (look for photos and a story here)—and another desert walk on the Hileman family property. I didn’t know my aunt and uncle had preserved-with-intention that bit of natural habitat, as my parents did the forest near their home and my uncle Donald has the farm in Michigan. My cousins hope to find a way to keep it from development even as they put the family home on the market. These three pieces of land in the Northwest, Southwest, and Midwest, preserved by my elders for the generations to come. I am button-busting proud to be part of such a legacy.

My father’s brother Donald—whose decline at 106 has recently accelerated—and my mother are hanging on to this world. I wish they could join the throng in the great Next. And so do they. I don’t really know what I believe about the Next, as opposed to what I hope for, but I do love to imagine the beloved family being reunited.

My mother is ready for the end of life, perhaps more fearful of living too long than of dying. But although there are continuing frustrations and difficulties following her move, my observation is that she is actively living again.

Listening to music from the hall and singing along to Amazing Grace.

Last week the activity director introduced her to Bob (not to be confused with table mate Bob who cuts her food for her). Bob 2 lives around the corner and likes to walk. He showed her how to find his room and told her to knock on his door anytime she wants to go for a walk. He waits for her in the dining room to finish eating then walks her home. It makes me giggle, and she laughs when she tells me about him. I have witnessed what the director told us would happen: the residents are all eager to help one another. It is a lovely thing.

Kindness engenders kindness. I am looking for ways to be a helper too. When I saw a resident struggling to unlock her door, I offered help. I told an elderly Asian resident she was beautiful, because she is. She blushed. At Fred Meyer yesterday I bought soup for a young homeless woman standing on the corner. I don’t think I am not a thoughtful person, I just have not often taken what feels like risk to me to step outside the circle I put myself in. The time is now.

We’ve been working with Mama to leave her room alone, always turning right to walk the halls clockwise so her room will come up on the right as it does when she returns from a meal. She has gotten much better at making the turns and finding her room with her poor vision, especially now that we have decorated her door, including a white ribbon. I know she can do it, but as of a week ago—when I last saw her before my trip—she wasn’t yet confident. “I’m afraid I’ll knock on the wrong door,” she said then. “So what?” I said. “You will be directed to the right door.” My mother is a helper, but she doesn’t know how to provide others the opportunity to give back.

Just as opening all the blinds at the house and the ability to come and go at will is enlarging my world, I think Mama’s world is bigger too, with more up close to engage her. What I see happening is everything I hoped for. I know it could have been a disaster, and it could have been very sad to remove her from her home. I could have felt the burden of guilt at what may have been (and perhaps was) perceived as my pushing her out. “Everyone” says home is best. But does there come a time when home might not be best? Maybe we waited too long. What I am seeing is that she still has life left after all, life besides a beating heart. Of course it isn’t perfect, but I think it’s better than home had become. And I know it’s better for me.

The hospice nurse reports Mama no longer pulls out her parade of physical ailments. I expect we will lose services again. One of her caregivers (we have retained three of them, for two hours a week each), says she is much less “cranky,” even sweet. It may be a temporary respite, but I believe that although she is ready to take her leave, she is no longer sitting around waiting for the end. I think she could live more years, in spite of what she told everyone before she moved that she would be gone in months.

More years! What have we done?! We have helped her with her oft-stated desire to “feel good and live well as long as I ‘have’ to be alive.” I feel pretty darn good about that.

Ruth and Stellajoe waiting out the War.

14 thoughts on “Goodbye to Aunt Ruth, Hello to Mama”