It’s there I never did the dishes right or cleaned the counters well enough. As a bratty teenager, it was there I stood  by the counter near the door to the hall and screamed at my mother for being ridiculous and she told me not to sass her and sent me to my room, which was fine with me.

It was to the kitchen my mother escaped to prepare Sunday mid-day dinner, saying she didn’t have time to sit in the living room and read the Sunday Seattle Times with the rest of the family—my sisters and I sprawled with the colored comics sections on the floor, chastised for “getting newspaper ink on the carpet” and doing it anyway.

The 1960s kitchen was designed for one person: the homemaker. Donna Reed, Margaret Anderson, June Cleaver, Stellajoe Staebler. There is no island around which family gathers to cook together or visit. The room is not open to a great room. There is little space to work in tandem.

I have very few memories of my mother teaching me to cook, only the banana bread, meatloaf, and chocolate chip cookies come to mind. I suppose I could have forgotten. But both of my sisters share my memories of never doing clean-up well enough. I suppose our mother saw it as a teachable moment. It was the stuff of therapy.

Mama continued to rule those square feet until the day she left home two and a half weeks ago, directing me and her caregivers in food preparation, food storage, and cleanliness—and complaining when she perceived the latter wasn’t happening. Caregivers were not asked back if Mama thought they hadn’t washed their hands, which of course they had. Only Dan the (former) Handy Man—a son of the Deep South—would clean the floor with rags on hands and knees; the caregivers and I all refused.

Last weekend, in the defection of DTHM (here’s that story if you missed it, details will have to wait for the “book), I cleaned the flat roof of storm debris and swept the standing water into the cleaned out drains.

When I returned to my kitchen reorganization project, I found in one of the several partially used spiral notebooks in a kitchen desk cubbyhole my mother’s old lists of what she needed a potential groundskeeper to do, including cleaning the roof once a week during the winter, following my father’s example, which may have been to get out of the house in his retirement. I won’t be doing it so often, and I need to invest in an extension ladder that isn’t 40 years old and heavy as hell. Or a groundskeeper of my own.

I finished my kitchen reorganization project, uncovering artifacts in the nineteen drawers, eighteen cabinets, the refrigerator (I’ve found a new one that fits the 1960s-designed space, but haven’t found the nerve to buy it), broom closet, counters, desk, cookbook shelf, spice cabinet.

I also removed the round table, the one I told my mother before I moved back to the west coast needed to go. It was the only thing I asked for. She didn’t respond when I said that. Later she said no. When I suggested, eagerly, that she take it with her to the Manor, she said, “I don’t want it there, I never liked it.” Excuse me? “Can I get rid of it?” I asked. “Yes,” she said. We gave it and the uncomfortable chairs to one of her caregivers, and I replaced it with my own table that can serve as a work surface for companion cooks. I took the green crockery bowl out of the back of a cabinet and put it in a place of honor. 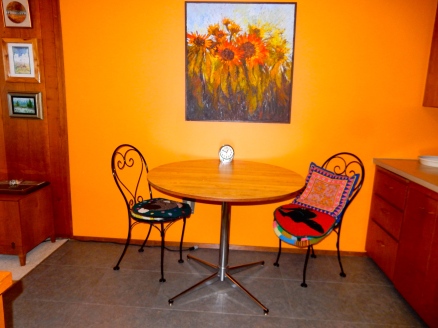 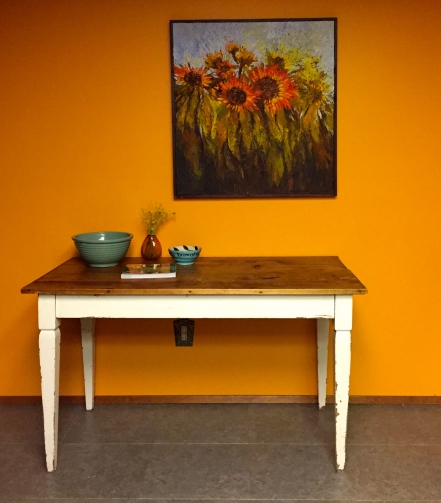 For many years I have thought if I could have just one thing to take away with me from the home of my childhood, it would be that bowl. Wrapped in that vessel are the few memories of time spent happily with my mother in her world. Did we talk? I don’t know. I’d like to think it was then we might have stood side by side happily creating and talking about our lives, but I don’t think so. I remember the back of her head that had eyes in it. Still, I remember no angst, no getting it wrong, no endless instruction. My memory is of my mother’s trust in my ability when my wooden spoon was in the green crockery bowl.

I wonder if my memory plays tricks on me, both the good ones around the bowl and the bad ones the rest of the time. Was the criticism as pervasive as I remember, the praise as absent? I’m inclined to say yes to both, since that has been the pattern again the past four years.

As I cleaned the roof—which I didn’t tell Mama I did, knowing she would worry—it occurred to me that, in spite of many stormy days since DTHM’s defection as persona non grata, she hasn’t mentioned the roof needing to be cleaned, she hasn’t asked me if I have found someone to clean it. In fact, she has asked nothing about the house at all. Has she finally given up control?

I think I have mixed feelings about that.

P.S. If you, dear reader, would like to send a card to my mother, she would love mail. Her address is:

6 thoughts on “The Green Crockery Bowl”