Have you ever had that vague feeling that you are on the verge of some new life force that you can’t quite pin down? It’s been a long time since that force has lurked in my body. And then, these past days, there it is.

It’s both exciting and frustrating—the latter because I don’t know what’s coming, and there’s a powerful urge to figure it out. Experience has told me to just sit with it. It’s pointless, even detrimental, to rush it. My dear friend and writing mentor says: “Move at the pace of guidance.”  A friend sent me this quote:

“There is a time for departure, even when there’s no certain place to go.” (Tennessee Williams)

There is a departure from the status quo coming, it is enough for now. 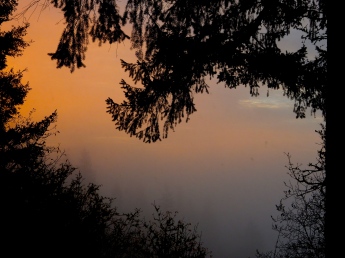 The more immediate departure is Mama moving to assisted living this weekend; she is on the verge of the new too. I have a strong feeling all will be well for her after an adjustment period for all of us. She does not deal well with small changes, but her long history has proven her amazingly resilient and adaptable to big change. Rebecca is equally sure she won’t be okay. Reality probably lies somewhere between.

Some of my favorite reads over the years have been formulaic women’s fiction. Books that will never be classics, but they inspire me to listen to my own voice calling through the fog. The formula is a woman (usually, but not always, middle-age) who suffers an unwelcome change in her life (usually the end of a relationship or a job) and after a period of grief, anger, and disbelief makes an unlikely move toward a repressed passion that wonderfully alters her life. I’m listening to one now on my weekly drives to and from Seattle, and it has prompted my heart to begin to hear whispers of my own passions.

I was reminded to take it slow Monday morning as I hurried out of the house. I opened the front door without regard to anything except getting to the car, and the sudden movement scared off three deer silently checking out the food sources in the garden just off the porch. I clicked a photo of them watching me from across the lawn and sent it to a friend. She asked what it was telling me. I thought about her question on my trip up I-5. 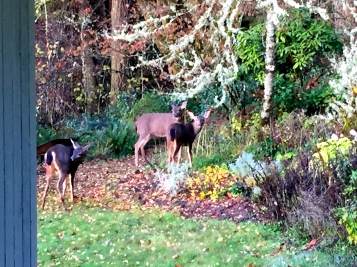 Don’t scare off your whisperings, don’t be in a rush, came the answer. And then I listened. I listened for first steps. I don’t look too far ahead, because that gets scary and, for me, potentially debilitating. At the same time, to ignore them will make them move on to a more receptive soul. (Elizabeth Gilbert said that in Big Magic.) I will ramble in my journal, which helps me listen. I will ask questions of my favorite (and only) tarot deck and turn over cards to guide me toward the answers—and more than likely, new questions—and journal some more. Then I will be ready to start making a to-do list with a timeline and deadlines—which I need—and share it with my weekly coffee shop friend and ask her for accountability.

The whispers come on the heels of three difficult months that rivaled the hardest of my life. Mama’s two hospital stays in late August and early September for bowel obstructions, followed by a fall and broken bones with six weeks of constant need for help in everyday living tasks, exhausted me and Rebecca emotionally and physically. It required a surge in the number of caregivers rotating through the haven my home should be. It led to a knowing that Mama needed to move before another similar event befell us.

We started looking at options and chose two. Mama said a loud “no” to one. When we began concentrating on the other one, she changed her preference. She was understandably afraid of any change and was, in her cognitive dissonance and inability to understand the toll it was taking on her children to keep her at home, hurting our hearts. We climbed into the rollercoaster car. Is Mama moving, is she staying? Where is best? What are the most important considerations for now, for next month, and for a year or two or three from now? As the reality of sending her away from her home of 55 years sank in, the doubts began and cracks opened in relationships—most frighteningly mine and my sister’s.

In the midst of the indecision, Mama’s encounters with me have been hurtful, helped along, I’m sorry to say, by someone who has been a non-family partner on this caregiving journey: Dan, the Handy Man. The relationship with him I had counted on for the future as I stay in a needy aging home and property, even after Mama is gone, may be irreparably damaged. I have not yet forgiven him his role in making this needed change more difficult for my mother, and possibly causing Mama’s malcontent toward me.

Rebecca helped Mama over the hurdle that Dan had made taller. Since then Mama has been more kind to and appreciative of me than she has been in the past four years. She is working toward the move now (she and a caregiver cleaned out her three sock drawers this week!), and is in better spirits than I have seen her in a long time. Her new attitude has gifted me with the ability to get excited about my own next months.

The first step in this new curve in the road is learning to care for my mother in a different way—helping her adjust and, I pray, finding a way to a different relationship with her—one that leaves me with emotional and physical space to look toward my own future years. Rebecca and I will continue to tread on uneven ground, determined to be respectful of each others emotional make-up and differing opinions of best practice. Nothing is more important than our love for each other.

Leonard Cohen and his powerful voice died. It makes me almost as sad as the election does. We need strong voices in the world, now more than ever. I leave you with his words as I dance my mother to the end of love, while finding a crack to slip through into my ongoing life. She is heading for the inner circle of the labyrinth, I outward into the world.

“Ring the bells that still can ring
Forget your perfect offering
There is a crack in everything
That’s how the light gets in.” (Anthem)