I’m stress eating. (Not that that’s a news flash.) I had just left Mama’s bedroom on Monday afternoon following the fourth “Grehhhhtchuuunnn” in 20 minutes.

“My ankles are so swollen! And they are painful on the top. Massage them with lotion.””Ow! Not on the top!”

“There’s cold air blowing on me.” (I closed the register.)

“‘Someone’ moved my comforter and I can’t reach it.” (Six inches farther away on the bed.) “I can’t get warm. Michelle must have turned down the thermostat.” (I heard her tell M to turn it down. And it was 85º in her room according the baby monitor.)

After I returned to the kitchen for the fourth time, where I was cooking refried black beans in preparation for dinner, I opened the freezer door. There was the chocolate chip mint ice cream, beckoning. I leaned against the counter and started spooning it. Fortunately I only got five bites before, “Grehhhhtchuuunnn.”

This is the second time in 24 hours she has said this. I have no idea where she got the notion we were discouraging the referral. In fact, we did our darndest to get her back into hospice—which is what I think she’s thinking when she says home health. I told her I wasn’t discouraging them, that in fact I had just called them since they hadn’t called me yet.

When Rebecca arrived Mama told her she was starving and she didn’t have breakfast until 10:00 because I wouldn’t fix it for her and then it took M an hour to make Malt-o-Meal “even though I was standing right there telling her what to do.” (She told me she didn’t eat until 11, and that it took M half an hour. And maybe if she had let M just read the box?) I asked her twice before M arrived at 9:15 if she was ready for breakfast, and she said she wanted to rest some more. I tried to get her up to eat some lunch, but she only wanted Boost.

The no-good-horrible-very-bad day started when I gently chided her for getting up several times in the night following her eight-day, mostly-in-bed hospital stay without calling for help, as we asked her to. I keep forgetting her sense of humor left the building long ago. My bad. She stayed in bed the rest of the day except for a while with M and once briefly later when I told her she absolutely had to get up and she pushed her walker through the house then had to lie down because she was so tired. But first the bathroom.

“Should I let you know when I need to get off the toilet or do it myself?”
“You can do it yourself.”
“What if I need help?” she snipped. Suni mudra, deep breathing, don’t speak until words form in your head and meet your approval.
“Then call me to help.”
“You told me not to do anything myself.”
“No, I didn’t. You are being ridiculous.” So much for waiting for internal approval.

I could go on, but you get the drift. It’s how the day went for both Michelle and me, and later for Rebecca. I left after supper for Seattle and my two little guys. Two-year-old behavior, difficult as it is, is much less unbecoming in an actual two year old. Especially when you aren’t his mother. Especially when most of the time he is delightful. 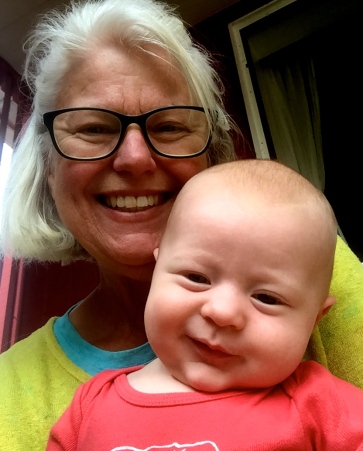 The two year old was up for the day at 4:30, and according to the moms, several times during the night, alternating with the baby. I heard nothing until 4:30. I was that tired. While the baby took a morning nap I called Mama’s PCP (again) about her hospital follow-up appointment, responded to a recorded survey about her hospital interment, called home health (again), rescheduled her dentist appointment, referred the follow-up call about Rebecca’s after-hours doctor call last night back to Rebecca, and called the hospital about the flight insurance reimbursement claim the hospitalist filled out for me and I forgot to retrieve.

I also forgot about a deadline for my paid job, let go of an impending deadline to submit something for a journal, and filled out the jury duty exemption form.

And now I’m wondering: Did I sabotage her unexpectedly speedy recovery because it made me think I really hadn’t needed to cancel my trip this week to North Carolina to see my friends and witness the wedding of one of them? I had been at peace with my decision until she bounced back so quickly. Then I was angry and I cried buckets over jumping the gun. So did I open my mouth Monday morning and, to her ears, tell her she had no business already being self-sufficient, and she obliged by becoming helpless? Do I feel better now? No, of course I don’t. She made herself, and thus me, miserable.

So, what to write to end this post with some learning? Memoir is supposed to reveal how the author has been transformed. Can I just say this time that I’m tired and I don’t want to do this any more? It is true. Monday was affirmation that I can’t do this kind of caregiving. Some daughters (and a few sons) can. Hats off to them, but I can’t. So when things settle down, Rebecca and I will be looking at next steps. I may not last the year I set for myself last month. I guess that’s the learning: don’t delay, and there are always choices.

I hope you weren’t seeking some inner growth inspiration here. That would be someone else’s blog this time. Maybe the next week will be better. Meanwhile, time with the little ones and their inspiringly patient mothers has been a balm.

9 thoughts on “Crisis: Eating Ice Cream from the Carton”