My fourth grandson was born last Thursday night. And now both of my children are families of four. Adrian is beautiful, of course, and Elliot is the light in my life. Standing witness to Elliot meeting his baby brother for the first time will go down as a highlight of my life. I can’t wait to get my Gigi-nanny-care job back. I’m so lucky they are close by. Next month I will see Max and Ethan when they come from North Carolina for Mama’s 100th birthday party. They live way too far away.

There are 99 years and 11 months difference in age between my mother and her newest great-grandson. It boggles the mind. A lot has changed in a century, things even the Jetsons didn’t know were coming. My mother’s family didn’t have a telephone, and now…well, you know. The first demonstration passenger plane flew just before she was born and now we’ve been to the moon and back. She was alive through two world wars and the Depression; she survived pin curls, house dresses, and 90 years without Facebook. We’ve survived 1984, Y2K, hot pants, and the Bush years.  Woodrow Wilson was president in 1916, about to be re-elected to a second term. Today a black man is president, about to be replaced (god-willing and the creeks don’t rise) by a woman. In 1916, penicillin was still a dozen years from discovery, now we replace hearts and hips and things. My daughter-in-love’s mother died last month—without meeting her second grandchild, which hurts my heart—and a blind man was gifted with her corneas. I like to imagine he is seeing his grandchildren for the first time because of her. 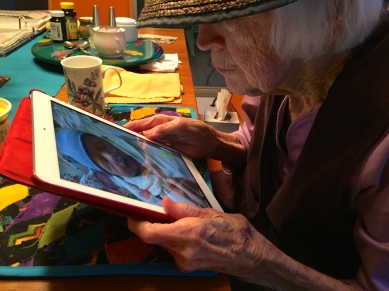 As I held a sleeping Adrian, I saw his mother’s hairline. And his great-grandmother’s. Neither of my children nor any of my grandchildren are the spitting image of me; I don’t even see me in them. I kind of wish that weren’t the case. But in many ways, ways others mostly don’t see, my children and I are alike. At least some of which I hope are good ways.

My sisters and I try so hard not to be our mother, and we are very different—from each other as well as from her—but I know I am stubborn and want to be in control. Just. Like. Her. Maybe that’s why I’m here doing this thing that I’m doing, to learn to let it go while I still can. Sometimes she worries about me and my life. “I never wanted my children to have to do this,” she says. She doesn’t understand how her fierce grasp on control makes it so much harder. Or maybe she doesn’t see that she is obsessively controlling. Or maybe she just can’t change now. She’s three weeks short of a century old, I guess if can believe she is in control, that’s a good thing. There isn’t much else left to her.

I’m beginning to understand why surprise birthday parties were invented. This one surely should have been. Of course we knew she would obsess over it and drive us absolutely bonkers, but really? Telling her to relax and let us take care of it doesn’t help. Telling her she is making it harder on us—as she tells us we are working too hard and she doesn’t want people to celebrate her—doesn’t help. “If you are letting the Today Show know (so she can be on the Smucker’s jar), be sure to include my maiden name.” That wasn’t on our to-do list, but now it is. “Did you invite so and so?” She cannot possibly come up with anyone we haven’t invited, but she keeps trying. We’ve invited dead people. “Have you heard from so and so?” At 100 years, a person cannot be someone other than who they are, who they have always been. At least not voluntarily. I can’t stop wanting that person to be—to have always been—someone different. I wish I could be someone different with her.

I am sad for my mother, and for my children, that we lived so far away from grandparents for all those years. I found an unmailed letter (it was Mama’s way of journaling it seems, to write letters and put them in file folders) in which she mourned the injustice of that fact, especially when friends talked about their grandchildren. I have to point out here that she and my father started it, with their own wanderlust. I lived far away from one of my grandmothers and in the lap of the other. The grandmother I grew up with—my mother’s mother, and she was much like her—was not my favorite. She wasn’t really a lap kind of grandmother, I didn’t mean that literally. To be perfectly honest, I was quite happy living far away from my mother. It is karma that I am accompanying her at life’s end. 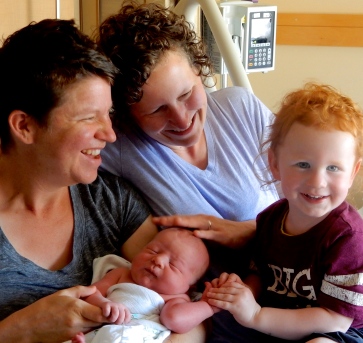 I’ve been working on the memoir I’m writing about these years—the years that were supposed to be one year and now have been four, and counting—and I’m struggling with the theme. What is this story about? Why did I come here? Why did I say yes? Why am I still here? I came thinking we could finally have the relationship I wanted with my mother—that such a thing is possible is one of the lies I told myself. I’m still here because I have to learn to accept who she is, and who I am with her. And let our relationship be okay, however it is. Over her very long life, she has perfected being unhappy with who she is, which adds to the challenge of loving her. But the gift I can give her is to love her as is. And forgive myself for not being perfect too.

I want to be a different mother to my adult children, and a different grandmother to their children. I feel like I am, but I don’t think they see me as different than I experience my mother. Maybe some family patterns just can’t be altered. They are seared into our genes just like a hairline. Ain’t that some shit?

20 thoughts on “And Then There Were Four”