One of my favorite movies is a 1991 Canadian film—Strangers in Good Company—in which seven elderly women and their young driver, on an outing from an old-folks home, become stranded in an isolated part of the Canadian countryside when their bus breaks down. The women—who are not professional actors, and who use their real names and backgrounds in the film—spend a few days in an abandoned house awaiting rescue, reflecting on their lives through a mostly ad libbed script. Through their shared crisis, they become a band of sisters: listening, revealing, encouraging, comforting.

I decided I needed to watch the movie again—now that I am in the company of a nonagenarian—and spent a rainy Monday afternoon on Netflix with the women and their stories. 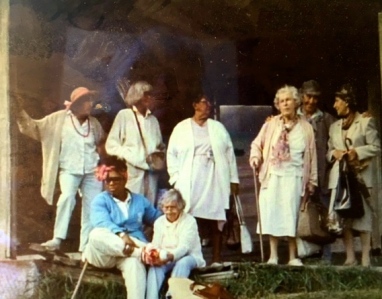 As they go about their simple chores, seeking to survive until help comes, they chat about their lives: all of them unique, interesting, and meaningful—as all our lives are. Sometimes it’s hard to remember the elderly had lives before they became centered on the business of mental and physical health, on the business of dying or trying not to. It got me reflecting on my mother’s life and the recording she is making of her memories.

I listened to a bit of a tape this week, helping her find where she left off on her last session. It was a story of playing with her brother in the creek at the foot of the hill in Tennessee their house sat on, amid the watercress and in the presence of a blue-winged dragonfly. She picked some watercress for her mother, thinking she was doing a good thing, except that it was baby lettuce and her mother was furious and punished her by tying her with clean diapers into a chair in the corner. “I got so tired,” my child-mother said.

The detail in what she remembers is astounding. (Equally so, how the brain works, that she can’t remember something I told her five minutes ago.) As I listened, I could almost see her brain remembering that scene, the words spoken, the blue sky and clouds, the fact that the dragonfly didn’t sting like the ones at a previous home did, the sound of her mother’s voice calling them to come home. Her voice on the tape is tender. I could feel her recall of the water and the air and the thrill of being “allowed” to play in the creek; but not of how the punishment may have robbed her of the pleasure. She seems to have forgotten all of her mother’s ill temper, both when she was a child and when she was trying to care for her in her old age.

How old are we in our minds? As the elderly return to a more childlike state, do their brains go back to childhood too? Could she have remembered the details 20 years ago when her mind was cluttered with the present? If the memories are happy ones, it doesn’t seem like a bad thing. I would like to return to the halcyon days of my childhood and escape the insanity of the current political campaign.

There is a gathering storm of nearing death on the horizon for the melancholy oldest of the women in the movie; and for all of them a sense that, even though most of them are still delighting in the present—as they deal with their heart issues, stroke recovery, aches and pains, loneliness, sorrow—there’s not much life ahead. But the movie doesn’t emphasize impermanence, rather a sense of the coming storm as an impetus to seize the moment, in spite of the fragility of their lives. It is a shining interlude of friendship, freedom, and unexpected adventure.

This blog has become a community of strangers in good company. Comments left on my posts reveal a silent sisterhood of family caregivers around the world, having many of the same sometimes frustrating and bewildering experiences I write about.

The mother of one of two sisters in mother-care with whom I am in close touch, died recently. As I looked back at the beginning posts of the private blog we have shared for nearly two years, in a journey of accompaniment, I found this first post I wrote to her:

“As we begin these letters, I am grateful for your company in this journey we find ourselves on: bidden, and yet, not. It is a lonely journey; and still there are many of us silently walking it. As you say, ‘the silence is broken here.'”

I invite you to tell your story in the comment section of any of these blog posts that resonate with you, and to reply to the comments of others you find here. It is an isolating existence, but we are in good company. When we break the silence, strangers become friends.

9 thoughts on “Strangers in Good Company”