My camping trip last week didn’t exactly fit the “glamping” model, but for me just the amenities of flush toilets and potable water put it in a class beyond most of my solo experiences of past years. It rained more in the Quinault valley last week than it has since April. A lot more. And my new, large (almost dry) tent was downright decadent. (It leaked a little the first night, but not after that. Maybe it had to seal up. Or something.)

Of course, there was the also the availability of the lodge half a mile away, with a writing desk from which I could watch the rain and hear the crackle of the fire in the huge stone fireplace, while drinking tea (their hot water, my tea bags). We all know weather forecasting is part science, part art; but they did get it right last week. And when it turned cold on Wednesday, it completely ceased being the first five “R”s.

But the last day was beautiful, and redeemed the previous four. After I took down my wet tent, I went for a second hike in the rainforest and then drove to the end of the road (about an hour, mostly on gravel and potholes) to Graves Creek. I hiked 30 minutes toward Enchanted Valley, a portion of a back-packing trip I have taken three times: at approximately 12 years of age, 22, and 40-ish. It occurs to me it’s time to do it again. I had accepted that my backpacking days were done; now suddenly I want to go there once more. But not alone. I am taking applications for a companion. Requirements: must not be more fit than I; must be in love with silent walking; must be scheduling-flexible—I don’t backpack in the rain.

Speaking of rain, this week is dry and warmer, but not hot (yet). Morning fog (which I love) gives way to blue. Fall is in the air. I love autumn; I mean I really love autumn. I have no idea how introverts live in Florida and Southern California. Summer exhausts me. I’m ready to put the garden to bed (let the deer have it; yes, the family got in while I was away), to hunker inside and watch the rain, curled up in a blanket with a fire in the fireplace. But I’m getting carried away. Mama keeps the temperature in the house too freaking hot for a blanket, and fires are not allowed. A girl can mourn the past, and dream of the future.

Mama does not like fall, because it comes before winter and she hates winter. Just as it’s hard for an introvert to live in a sun-all-the-time climate, it’s challenging for someone with seasonal depression to live in the Pacific Northwest winter. Last week, while I was gone, the Hospice nurse and Mama discussed depression. (Listening to conversations between them is fascinating.) The nurse posed it as anxiety, somehow knowing the word “depression” has always been a conversation-stopper for Mama: as in, she does not believe herself to be depressed because, well, that’s a story with a long history.

Jo Ann, in my eavesdropping stead, reports Mama told the nurse that “she was anxious during the night when the wind was blowing hard.” (As we all are.) This week, when the nurse revisited it to tell Mama she had researched some medications for her, formulated for the elderly—it will be a miracle if Mama agrees to take anything after a lifetime of refusing to—Mama prevaricated. “It’s not anything in me that is a problem,” she said; “it’s that my daughters don’t understand my limitations and they get angry and make me feel bad about myself.”

That led to a fascinating discussion between them on who the anger belongs to, and the value of expressing it over stuffing it down. “Are you saying,” she said, “I should respond to anger with anger?” “Yes!” the nurse said. “It’s not healthy to push it down.” Oh my god. But a lifetime stuffer is not going to change at 99. (Perversely, I think I sometimes get angry trying to goad her into getting mad back. And could we also talk about who owns their depression/anxiety?) There was another discussion among me and my sisters about who, exactly, doesn’t accept her limitations: us or her. This after her microwaved poached egg hadn’t worked that morning because she can’t see to push the right buttons and won’t let me help her. 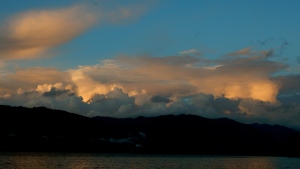 The nurse told me after their session yesterday she almost certainly won’t be able to keep us in Hospice, barring some “event” between now and the end of October. She is just too healthy. But, she said, we’ll try to get those things that Medicare doesn’t take into consideration in shape before then (like “anxiety.”) Well, she didn’t mention Medicare not caring, exactly; that is my interpretation. I thanked her for being in it with us for now. She said being a family caregiver is really hard; it’s always good to have an outsider involved. Amen to that.

Rain, sun, changing seasons. As we age, the fog intensifies and blue sky is harder to come by. We will weather it. One day at a time, and with lots of helpers. I’m grateful for opportunities to get away and thank my sisters and the cadre of supporting actors for making it possible (there are ten of us now, working hard to hold Mama up, while letting her think she’s standing independently).

Sunday I will see Elliot! (who is reportedly adjusting to daycare). He is the sunshine.