She’s one of the lucky ones, my mother, which means so are my sisters and I. She is healthy. Her blood pressure is outrageously perfect, her lungs are clear, she is mobile, her heart is ticking on. And her bowel sounds are good—even though when she is constipated (which alternates daily with overly-loose bowels) she thinks she has stomach cancer because her mother had it, and “I know the symptoms, Gretchen.” Okay, sure, and what is it you want to do about it in the middle of Friday night?

She wants to go to the hospital—the one 35 miles away, not the local one. She doesn’t know if the ambulance will take her there. She’s too uncomfortable to go in the car. She will not go to the local hospital because they will want to take X-rays. She says she doesn’t like X-rays. Like any E.R. wouldn’t take an X-ray when she is there because she is sure she has a bowel blockage. Or cancer. I didn’t say her mind was stable.

After two early-morning weekend crises in six weeks, in which we avoided the E.R. (though she was irritated with me for weaseling out of it), but did go to Urgent Care—where they took an X-ray—I asked her doctor, again, for hospice; this time laying out my case in writing:

My mother continues to have chronic stomach and bowel issues, after-hour panics thinking she has to go to the ER because of abdominal pain, followed up by doctor’s appointments with the same recommendation every time—take your Miralax; she is sleeping more, having more trouble eating, becoming more irrational and negative and generally is not herself. She is coughing while she eats, saying something feels stuck in her throat; trouble breathing at night has become an ongoing complaint with the same “we can’t do anything we would recommend for someone your age” result.

I need someone who checks on her regularly and is available to assure her that going to the hospital is not the answer. I know we are subject to Medicare rules (though I can’t understand how being 99 isn’t terminal), but if there is anyway you can justify it, please! I so want to keep her at home, but I need help!

The doctor was swayed, said she was a perfect candidate and put in the order.

To qualify for hospice care, there must a stated desire that the patient does not wish medical intervention to prolong life; and a doctor has to certify that the patient has a 51% chance of dying in the next six months. 51% leaves a lot of room for those who are not at imminent risk of death. But for Medicare to continue to pay, there must be evidence of decline. Being almost completely blind does not qualify. Age-appropriate irrationality and forgetfulness will not result in death—in six months or ever. Being on a roller coaster of emotional well-being isn’t quantifiable. A family caregiver who wants more for both her own and her mother’s quality of life is immaterial. Being on the edge of a century old, which inherently puts one at risk of a life-changing event at any moment, is not of interest to Medicare. She can dress herself—and even, most of the time, prepare her own hot breakfast, because she refuses offers of help—therefore she is doing fine.

Everything I read about geriatric health care—and those younger who are struggling with terminal illness—states that most people view hospice as a patient in bed with a morphine drip. Failing to understand the multiple benefits of the program, doctors don’t recommend it until the patient is days from death; and families don’t ask for it because they don’t want to believe their loved one is going to die. And so I knocked on the door. 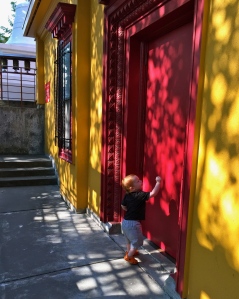 We have met three members of the team once each: the bath aide (“It felt so good!”); the social worker, who is finding a volunteer who likes to read poetry (her daughters do not like to, her caregiver and the high school boy who reads sermons to her cannot—Mama’s assessment); the chaplain (it was so nice to hear Mama having a conversation about something other than poop with a good listener who knew the questions to ask). Both the social worker and the chaplain told me they are here as much for the family as for the patient. The nurse has come three times. It is the nurse’s reports that will determine Mama’s continuation in the program.

We have three months. I don’t wish my mother to decline. But darn it, I know they are going to disqualify her; she couldn’t even continue to qualify for the visiting nurse program last winter, because the eight weeks with someone listening to her complaints lifted her spirits, and therefore her general health (a common occurrence, I’m told—and why isn’t that a reason to continue care, rather than end it?). And as soon as they do, she will be constipated; no, going all the time; no, constipated. She will start coughing at the table again and sleeping whenever she sits down. And sooner or later, at 5am some Sunday morning, she will insist she needs to go to the E.R. But not the local one, because they will want to take an X-ray.

I want to keep her out of the E.R., too. Emergency rooms lead to hospital admission, which never leads to anything good for the elderly. (Here is what happened last time she was admitted.) But I don’t know what to do when she is in obvious pain and accusing me of not caring. Her pressure on me to do something, when I know in my core that just standing there might be more helpful, is overwhelming. Hospice stands there with the caregiver.

It is true, if I am completely honest, she does not need hospice. I do. 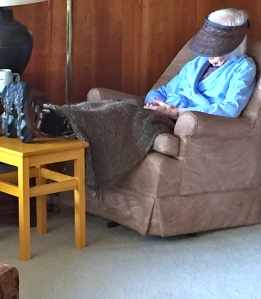 12 thoughts on “And So It Begins, or Not: Hospice”