We have been on stormy seas for a week. The stomach distress that led to last Sunday’s Urgent Care crisis stayed with us. Mama just didn’t feel well. She didn’t dress, spent a lot of time lying down, ate only because I insisted: “You can’t poop if you don’t eat.” And drank a lot of Gatorade.

On Thursday it came to me: her mother died 32 days after her 99th birthday. Sunday, the day of the crisis, was 31 days after Mama’s 99th birthday. She has now outlived her mother. If she was aware of the significance, she hasn’t said. Nor have I. But I wonder about her subconscious awareness. Her mother had stomach cancer, though it didn’t necessarily kill her. Besides her vision, chronic stomach and bowel issues are Mama’s biggest complaint.

Sunday morning she pooped. Halleluiah. In celebration, she dressed and went out to walk on the deck. I heard her—from my quarters in the basement—moving the furniture around to recreate her slalom course after it had been beautifully arranged by Dan the Handy Man after he cleaned the maple tree debris from between the deck boards in preparation for painting. She walks down the catwalk to the end, then back to the deck; around the perfectly haphazardly grouped chairs (which apparently is different from walking around chairs placed around the table or in conversational configuration), and back down the catwalk.

As I heard the banging, scraping, and clattering of the furniture moving into formation, I thought of the Titanic: you can move the chairs all you want, but it’s still going to hit that iceberg and go down. The prognosis for old age is a lot like that. 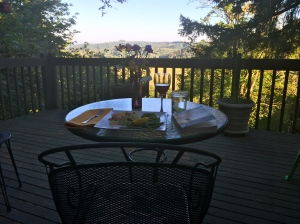 Mama has long been fastidious about what she eats, and before my father died, about what he ate. He died of a heart attack in spite of her questionably successful efforts to reduce sodium and fat. And she has stomach issues in spite of decades of eating only soft food, no nuts, no raw vegetables, fruit (preferably canned) with every meal, nothing with seeds, no cheese. It has probably kept her alive, but to what end? Is living to the century mark really the be all? “Dance the ship down” is my motto. I think it was my father’s, too.

In my three years with my mother (see Retrospective Part 1) I have become more at peace with this work, more sure it is the right thing to be doing, less sure it is the right thing to be doing, more understanding, more frustrated, more unsure that I can continue doing it, more weary; and, as it becomes more clear that I have to be vigilant about caring for myself, it becomes more difficult to do so. Twice in the past days she became upset because she couldn’t reach me. I was outside. The first time she forgot how to use the phone and the second time forgot to try to use the phone.

In my three years here with her, she has become more accustomed to my presence (though not always happy about it), her vision has decreased to nearly nothing, she is more easily irritated with me, more irrational, more negative, more obsessive, more in need of my attempts to find ways to make her life easier and more resistant to trying them; she sleeps more and eats less more slowly.

A lot of my job is trying to persuade her to do things, or stop doing them: take her Miralax, stop worrying, let me take care of some of things that are difficult for her, not buy vegetables that there is an abundance of in the garden—or already in the refrigerator. I am largely unsuccessful. In three years, the only thing she has let me completely take over is bill-paying.

I see my role as keeping it all together beneath her radar while living with the fact that she believes she is holding it all together herself and I am just in the way. Okay, that is my perception. I do believe deep down she knows it is more than my presence in the basement that is keeping her in her home, but she has never been one to throw appreciation or praise out willy-nilly, even in my childhood. Which is probably why I still crave being told I am appreciated and doing a good job. I have to depend on my sisters for affirmation, and I still want it from my mother.

I rescued a baby rabbit from imminent death in the driveway this week. Well, not really rescued: I moved it to a more pleasant place to die. My friend Vee says I’m doing that for more than the bunny. I’m afraid Mama might beg to differ. 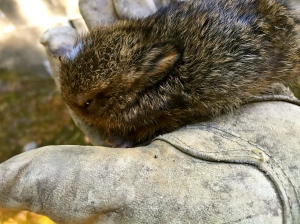 When I suggested on three occasions last week that perhaps the doctor-suggested Gatorade she was drinking was causing her stomach distress (because it upsets my stomach), she told me in no uncertain terms that Gatorade was not the problem.

“Wouldn’t it be worth it,” I asked, “to leave it off for a day and see if you feel better?” She got agitated with me, and I let it go. The next day I suggested that she at least dilute it.

“It doesn’t taste good diluted,” she said.
“It’s not supposed to taste good,” I countered, “that’s what alcohol is for.” Can I drink at 9am?

The third day of listening to her complaints, I told her I was hiding the Gatorade and she was not going to drink it that day. “Well, okay,” she snipped, “I guess my 99 years of experience doesn’t count for anything.”

Rebecca quick-like, because I report all such ridiculous conversations to her, looked online: “Gatorade can cause bloating, GI distress, and stomach distention.” Boo yah. When I presented Mama with the internet confirmation of what I had been suggesting all week, she said, “Well, yeah,” in the tone that implied of course she knew that. It is psychological warfare, and she is winning. I made her a homemade electrolyte drink* without the high fructose sugar that is the problem. I have been away for 24 hours; I wonder if she is drinking it.

The days morph from one to another. Weekends are like any other day; there is no excitement over Fridays or dread of Mondays. Each morning when I wake my first thought is “what day is this?” My second is “what the hell will I fix Mama for dinner?”

Mostly I find myself firmly in the present: It is 2015; I am 63 and living in this familiar and foreign place with my mother. But every now and then I feel what I imagine it will be like to live here without her—in charge, for better or for worse. And even less often—perhaps when walking down the trail through the woods from the garden to the house—for a singular moment I am in my childhood again, smelling the damp green earth heading for the swing suspended on a beam between two tall Douglas firs.

I’m reading the letters my father wrote to mother from his army schooling prior to their marriage before he deployed to Europe during World War 2. [Samples can be read here, here, and here.] He writes:

“Sometimes I wonder what I did with all my time when I was at Norris [Tennessee, prior to enlistment]. [I worked] from 8 till 5. That seems so short now. However, in spite of preconceived notions, a fellow seems to become accustomed to almost anything. The hours [here] once seemed tremendous. Now it’s routine. At first it seems an awful hardship—and when it gets back to that again, it will no doubt seem very wonderful.”

P.S. Mama drank two batches of it, then said it upset her stomach and went back to the Gatorade, and stopped complaining about more than the usual bloating and stomach distress.