Mama woke Sunday morning with severe abdominal pain, calling to me over the baby monitor at 6:00. A crisis of the abdomen seems to be an annual event over the past several years. It’s always on a weekend and often when there is only one daughter in town, as happened this time. I know she was hurting, I know it terrified her. But she makes it very hard to know what is real and what involves, shall I say, an enhanced perception of the severity of the situation. Her many self-diagnoses included everything from too much exercise or too much Miralax, to a parasite (maybe a peach had a worm in it) or stomach cancer. (I suggested, with evidence, gas, to which she said nothing.)

In the face of her excessive moaning, groaning, and demanding, and refusal of everything I suggested to make her more comfortable, I struggled to be patient. I apologize to readers for sounding callous, but we’ve been here many times; and it’s maddening and exhausting, and it’s almost always been something that will resolve itself.

I steadfastly refused her pleas to “go to the ER, but only to the one in Olympia”—35 miles away—and she “can’t sit up in the car to get there” and she thinks the ambulance won’t take her there unless she first goes to the local hospital and she won’t go there. If I was confused by what she wanted, I know she was. The hospital and the elderly are not a good combination; and without Rebecca—who was on much deserved R&R on the other side of the state and had to cut her leisurely drive home short because I needed her too much to leave her unaware—there was no way I was dealing with a hospital.

I suggested Urgent Care, but Mama said she needed an X-ray and couldn’t get one there. I called the doctor on call (who happened to be her doctor) and she didn’t think it sounded like a blockage—Mama’s biggest fear, though oddly she didn’t mention it this time. Nor, happily, was she constipated, the usual reason for her pain. She suggested Urgent Care to get an X-ray. (Yes, they do X-rays.) So I made a decision and told Mama that’s what we were doing, and we were not going to the hospital. She balked, but sometimes it just has to be taken out of her hands. (Note to self: tell, don’t ask, more often.)

She told the UC doctor she didn’t like X-rays, and he could only do one. What? Was that a last gasp effort to stay in control? (He did two.) The tentative diagnosis was dehydration, maybe gas. “Drink Gatorade.” She felt “much better” after the first two sips of Gatorade, and was her old self again on Monday. I cancelled my R&R and stayed home with her to be sure. She had a relapse early Tuesday morning and we were back to square one. But this time her much-more-patient paid caregiver was here, and her doctor made an opening in her schedule, and Rebecca was back. Thank God for a sister; I don’t know how people do this alone.

The doctor and a follow-up X-ray confirmed the diagnosis that nothing else was wrong. Or if it was, it had resolved itself. Push fluids and insist that she eat. I have to fight very hard to keep my frustration and irritation with her disastercizing and need for control in the darkness and squeeze love out around it. Challenging. Not always successful. But my refusal to be sucked in by her fear saved her from the ER. Call it tough love.

I spend a lot of thought on why she does what she does. Why she makes things up to explain her world, speculating rather than waiting for or believing the facts. Does she fabricate explanations of why things are the way they are to protect herself from the chaos of reality? Is the real story (she’s old, her body is worn out) not dramatic enough? She doesn’t have gas, she has stomach cancer. Her friend’s birthday party wasn’t canceled because she didn’t feel well, she must have died. She isn’t confused or forgetful, I am.

Below my house on the hill is a tangle of sweet peas bordered by the simple bright faces of daisies. Both plants are invasive, but like the passion flower that grew on my North Carolina chain link fence and spread underground to the lawn, they are beautiful. My father mowed the daisies down because he liked the pristine look of shorn meadow grass, and his daisy-loving females scorned him for it. Mama had them cut in their prime this year because she feared a wild fire.

My mother is a lovely person, everyone who knows her is inspired by her spirit. At 99, she is a model for what the luckiest of the old-old can be. More and more, Mama’s pervasively invasive fear overcomes her beautiful spirit. And, sadly, it blinds me to her beauty. I’m glad others see it.

Wednesday night, after a good day, she said was constipated. I’m in Seattle with my bright-light of a grandson. Back on duty in a few hours. 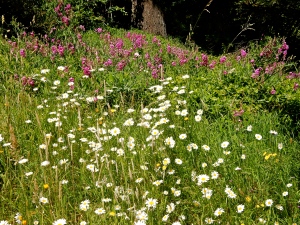 6 thoughts on “Crisis: Staying Out of the ER”