“I’m anxious to see you,” Mama told a friend on the phone the other day. It’s a word she has always used to mean both uneasy and excited, but it’s been since living with her I have realized I don’t like the connotation that all of life is anxious. I’ve begun stopping as I’m speaking to remind myself to say “eager,” the positive word, instead. As I learn to find the right word, I realize it’s the accurate word. “Anxious” almost never applies to what I’m feeling.

I have thought the use of “anxious” (which she pronounces “an-chus”) fits Mama’s personality; she is an anxious person. Maybe I inherited my father’s genes in the anxiety vs eager DNA; I never knew him to be an anxious person. So I’m stunned as I read my father’s war-time letters to discover that he used anxious for eager as well! Intrigued, I looked up the etiology of the two words: “The discovery that ‘anxious’ should not be used to mean ‘eager’ seems to have been made in the U.S. in the early 20th century.” I guess the usage was the custom of the day, and has nothing to do with personality. I’m out to jump into the 21st century and make the shift my parents clearly missed.

I’m often astounded by the things Mama worries about. Two years ago, we had a favorite crazy conversation. Mama had told me about an award the Friends of Seminary Hill Natural Area received. The president thought my mother, as chief instigator of the effort to preserve and protect 56 acres of the forested hill we live on, should have it.

“It’s in a box on a closet shelf. I would like to display it, but I’m afraid it might get broken in stormy weather.”

“Is it for outside?” I ask, a little confused.

“I don’t understand why a storm would endanger it.”

“The wind can blow really hard,” she says, a bit exasperated with my obtuseness. “I’m afraid if I put it out it would get broken if a branch falls.”

“I’m sorry,” I say, really confused now. “I’m still not getting how that would be a problem if it’s inside the house.”

Mama moves between clarity and understanding, and fabrication and faulty memory. Usually her anxieties are contrived, as if she doesn’t know how to convince herself she is still among the living if she isn’t worrying about something. She’s eating too much (she weighs 80 pounds), she exercises too much/not enough, she drinks too much water/not enough, it’s too late to plant annuals, she has stomach cancer. As if she hasn’t enough of her own worries, she projects her own anxieties onto other people and worries about them. Oddly, she has never worried about ulcers.

Going along with what she comes up with requires practice. I try to nod and mumble something like, “That must be hard,” or “How can I help?” when what I really mean is “It must be so hard to be you.” More often I say something unhelpful like, “You worry more than anyone I’ve ever known.”

Telling her not to worry isn’t helpful; it’s in her DNA. Trying to figure out the root of her worry and how I can help sometimes relieves her anxiety a bit. Knowing she is going to worry regardless of reality or my interventions helps me. It is not my job to keep her from worrying, but to make sure she has nothing to worry about. Two very different goals.

If I were a worrier, I would be in a panic about how I am going to continue to play this role indefinitely; and how I will continue to live when Mama is gone, mostly financially, but also without the purpose that has consumed me for nearly three years now. I want to be a published writer, I could worry about my ability to make that happen. I want to turn the property into a business venture, but I have doubt about my ability to make that happen, and I could consume myself with worry over it. But how would that be helpful?

I read this recently about making art, and I figure life is art; it helps me not to be anxious about the future.

Making art means working in the face of uncertainty; it means living with doubt and contradiction, doing something no one much cares whether you do, and for which there may be neither audience nor reward.

—David Bayles and Ted Orland, Art and Fear: On the
Perils and Rewards of Artmaking

And so I live day to day. To worry about tomorrow is to waste today. By observing the burden of my mother’s anxiety, I learn this last lesson from her: how I don’t want to be. As she searches for things to worry about, I search for “a quiet mind and a serene spirit.” I find it in the garden where she told me nothing would grow. What is nurtured will grow, I figure. And I ask myself, “Am I nurturing anxiety or eagerness?”

Life is always too short.
We will never be able to see
everything we wanted to see,
do all the things we wanted to do,
or achieve all the successes
we thought so important.

But to arrive at a quiet mind,
and a serene spirit,
is the supreme accomplishment.
If we do this,
we have done all…

—William Martin, The Sage’s Tao Te Ching: Ancient Advice for the Second Half of Life 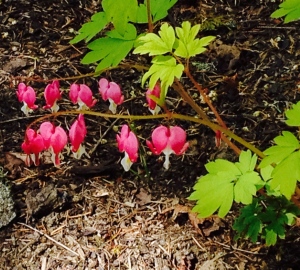 7 thoughts on “The Burden of Anxiety”