It would have been hard to top my hike to Skyline Divide at Mt. Baker on the first full day of my recent camping adventure, but I wasn’t looking for a good, better, best chronology. Life just doesn’t work that way. I was on holiday experiencing life away from the ordinary. And, in fact, what I wanted on the second day was to take a shorter hike and spend a large chunk of time at my campsite by the river: in the hammock, in the sun, by the fire. Reading and working on my writing project and relaxing were my agenda. 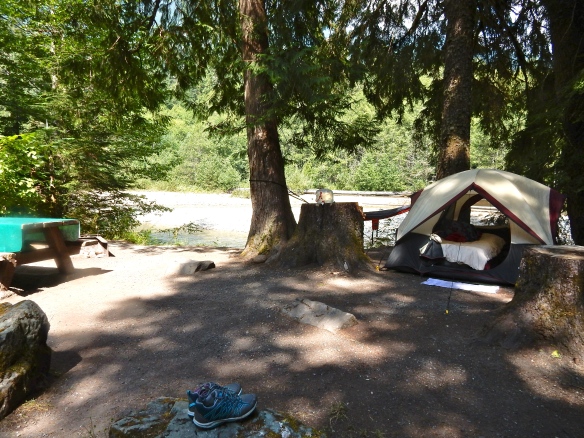 I chose Artist Point for day two; hard to go wrong with a place name like that. It’s at the end of the Mt. Baker Highway (highway being a deceptive description—it was paved and two-lane, in an area rife with one-lane gravel Forest Service roads; if that was the criteria, it met it), just beyond the ski area. My first stop was Heather Meadows and its trails off the ski area’s parking lot. I was a little disgruntled to find work with heavy equipment happening; the noise followed me down the Bagley Lakes trail. It is a short and easy trail, and eventually the noise of the stream covered the noise of the bulldozer. Two sweet glacier-melt lakes and a creek with islands of wildflowers in its center flank the trail built for families with small children. It was a weekday though, and I only saw two families, from a distance.

The bridge across the stream was fairy tale-like; a little too cute, but like I said, the trail was built for “toddlers and flip-flop wearers,” not intrepid wilderness hikers with trekking poles, such as myself.

From the bridge, I turned onto the Chain Lakes trail. I knew I wasn’t doing the entire 9-mile loop of “strenuous” hiking; but I wanted to go part way. Right away, it was no longer a trail for children. Well, maybe it was. They would have scampered right across the rock face I suppose. I have a bit of aeroacrophobia (a fear of open high places), and I considered turning back. But I talked myself out of it. “You can’t turn back every time the going gets rough,” I chided myself. What did Eleanor Roosevelt say? “Do one thing every day that scares you”? (Yes, that’s the trail in the photo below. I know, tame; I will not be doing any rock climbing. Ever.)

From there on the trail was basically a boulder field on a mountainside. There were huckleberries! And a beautiful view of Mt. Shuskan and the Bagley Lakes when I got higher.

I didn’t get to Chain Lakes, but it’s on my list for next time. I turned around after watching the people who had passed me on the trail continuing up where it looked like there could not possibly be a trail.

I returned to my car—and the bulldozer—via the trail on the other side of the stream, more interesting than the child-friendly side. 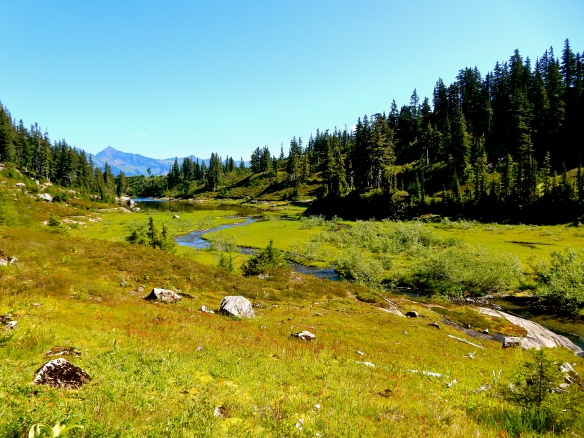 I drove on to Artist point at the end of the road (with a bout of road aeroacrophobia) to another trail and views of Mt. Baker and Mt. Shuskan. I had decided against Table Mountain after reading the description in several publications (“…parts are steep and somewhat [read very] exposed. If the route looks unnerving, turn around…”) and chose another section of the Chain Lakes trail. I hadn’t gone far when I saw the trail stretched across the side of a steep slope. I wasn’t fearful of it, but I could see it was very long and the view, I surmised, wouldn’t be much different than what I could see from where I was. By the time I got to the other side, I would be ready to turn back. Also, there was a family with two young children in front of me (who were making me very nervous), and a couple with two dogs behind me. This was not a trail built for leap frog or for turning around in the middle. Going on felt claustrophobic. 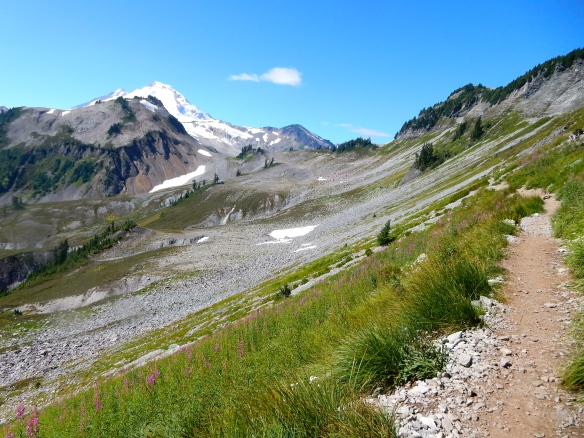 I returned to the car, and drove back past Mt. Shuskan doubled in Picture Lake, and home to my campsite.

The afternoon and evening stretched ahead with no obligations. I did read and write and took a nap in the hammock in the sun. Then built a fire, poured a glass of wine, and read some more. Paradise.

7 thoughts on “Flip Flops to Aeroacrophobia”